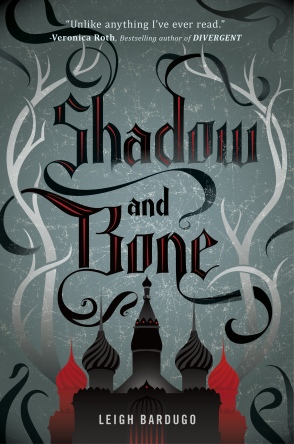 The Shadow Fold, a swathe of impenetrable darkness, crawling with monsters that feast on human flesh, is slowly destroying the once-great nation of Ravka.

Alina, a pale, lonely orphan, discovers a unique power that thrusts her into the lavish world of the kingdom’s magical elite—the Grisha. Could she be the key to unravelling the dark fabric of the Shadow Fold and setting Ravka free?

The Darkling, a creature of seductive charm and terrifying power, leader of the Grisha. If Alina is to fulfill her destiny, she must discover how to unlock her gift and face up to her dangerous attraction to him.

But what of Mal, Alina’s childhood best friend? As Alina contemplates her dazzling new future, why can’t she ever quite forget him?

Before reading Shadow and Bone, I’ve read great reviews about it and naturally, had high expectations. Moreover, Veronica Roth, one of my favourite authors of all time claimed it was really good so I obviously couldn’t not read it. The book both did and did not live up to my expectations.

The protagonist, Alina Starkov, lived a pretty mundane life (or as mundane as being a soldier in the First Army could be) and didn’t seem to have good self-esteem at the start. However, she made tremendous growth as the story progressed (after she found out she’s a Grisha and all that), slowly learning more about herself. But there were definitely times where I felt a little annoyed with Alina and her naïveté because I expected her to be a stronger character.

As for the love angle/triangle… I wouldn’t exactly call it that. I can’t explain though, because that would just give off spoilers. What I can say is that those who dislike love angles/triangles would probably be able to tolerate the romance. Regarding the guys, I started off preferring the Darkling because Mal seemed way too arrogant and immature at the start. And I’ve never really liked blonde guys. But I always got the niggling feeling that there was a darker (no pun intended) side to the Darkling so I didn’t truly ship any of them.

Although, in the end, Mal won me over. Probably because we got to see more of him towards the end and hey! He’s a pretty decent (fine, more than just decent) guy!

My favourite part of the book was the whole concept of the fantasy world it was set in. It doesn’t take a genius to figure out that if I were in it, I would want to be a Grisha so darn bad. They kind of reminded me of the element Benders in Avatar: The Last Airbender and The Legend of Korra, what with all the element wielding or in the case of Heartrenders, the wielding of blood.

One concern I had before starting on Shadow and Bone was the fact that many people criticized the ancient Russia vibes in it being inaccurate and all that. Personally, I have close to no knowledge on ancient Russia so if it had any inaccuracies, I wasn’t able to tell. However, it was just inspired by ancient Russia, not set in it. So I guess it shouldn’t be expected that everything be completely realistic. It is a fantasy novel after all!

Although slightly predictable, the ending was quite engaging and though it wasn’t really a cliffhanger, it will definitely leave you curious. Very curious.

In a nutshell, I wouldn’t say Shadow and Bone was completely amazing due to the fact that Alina really wasn’t the best protagonist out there. She was a tad too gullible. Despite that, the book does have plenty of redeeming qualities, especially the wonderful, scary, addictive, fantastic world it was set in.