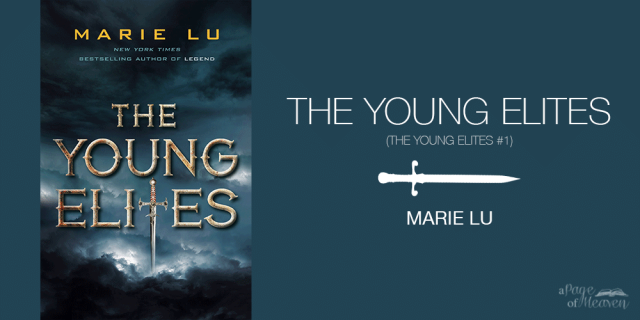 I am tired of being used, hurt, and cast aside.

Adelina Amouteru is a survivor of the blood fever. A decade ago, the deadly illness swept through her nation. Most of the infected perished, while many of the children who survived were left with strange markings. Adelina’s black hair turned silver, her lashes went pale, and now she has only a jagged scar where her left eye once was. Her cruel father believes she is a malfetto, an abomination, ruining their family’s good name and standing in the way of their fortune. But some of the fever’s survivors are rumored to possess more than just scars—they are believed to have mysterious and powerful gifts, and though their identities remain secret, they have come to be called the Young Elites.

Teren Santoro works for the king. As Leader of the Inquisition Axis, it is his job to seek out the Young Elites, to destroy them before they destroy the nation. He believes the Young Elites to be dangerous and vengeful, but it’s Teren who may possess the darkest secret of all.

Enzo Valenciano is a member of the Dagger Society. This secret sect of Young Elites seeks out others like them before the Inquisition Axis can. But when the Daggers find Adelina, they discover someone with powers like they’ve never seen.

Adelina wants to believe Enzo is on her side, and that Teren is the true enemy. But the lives of these three will collide in unexpected ways, as each fights a very different and personal battle. But of one thing they are all certain: Adelina has abilities that shouldn’t belong in this world. A vengeful blackness in her heart. And a desire to destroy all who dare to cross her.

It is my turn to use. My turn to hurt.

Someone give Marie Lu a badge for bravery in venturing into the fantasy genre with such unconventional characters and an even more innovative plot. This novel definitely surpassed my expectations. Although The Young Elites couldn’t be any more different from the Legend trilogy, it was in no way lacking in comparison.

The best part of this book was the beautiful world Lu created. Every single detail had been taken into consideration and she manages to inject supernatural aspects into the realm while still keeping it believable. Inundated with not just fantastical creatures but characters too, it’s nearly impossible not to get sucked into the world of The Young Elites.

The protagonist – Adelina Amouteru (yes, we kind of share first names so I might be a teensy bit biased toward her) – is worlds apart from most characters I’ve read about. Stated to be a villainous heroine ever since Lu had announced The Young Elites, her fall to evilness reverberates in every action and choice made.

Moreover, Adelina’s circumstances does not make it any easier for her to resist the darkness within and she’s definitely a nurtured villain and not one by nature. People on both sides of the law are after her – the Dagger Society, a cadre of Young Elites intent on taking down the Kenettran rulers, and the Inquisition Axis – and everyone wants to use her for some gain.

“Embellish your flaws,” he said softly. “They will turn into your assets. And if you become one of us, I will teach you to wield them like an assassin wields a knife.”

In The Young Elites, the line between good and evil is insanely blurred. The villains have pasts that make it difficult for you to outright despise them while the heroes are far from justice-upholding, full-of-morals Clark Kents. It does make you – conflictingly – love them all though.

As for the conclusion of this first novel, I can definitely say I did not see the plot twist coming. Heartbreaking as it was, Lu had set the stage for even more amazing characters, life changing events, and intense battles to come. The urge to vehemently shove The Young Elites into everyone’s hands is REAL and so is the struggle of – not-so-patiently – waiting on the next book, The Rose Society.

5 thoughts on “Review: The Young Elites by Marie Lu”