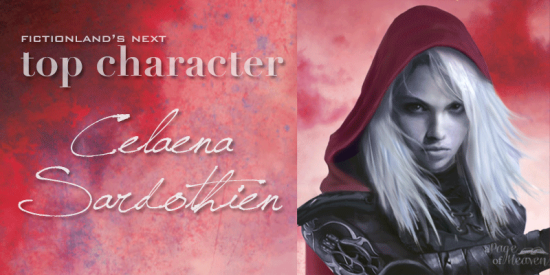 Fictionland’s Next Top Character is a feature where we dedicate an entire post to various characters from works of fiction – be it books, movies, TV shows or anime – because we all know many of them deserve more than a few sentences in a review! Feel free to participate in this feature and drop your link in the comments!

Who is Celaena Sardothien?

First: TODAY IS CELAENA’S BIRTHDAY! HAPPY BIRTHDAY TO MY FICTIONAL SOUL-TWIN! What better way to kick-off this new feature/meme? On a more sane note, Celaena Sardothien is the protagonist of Sarah J. Maas Throne of Glass series, including six books and one prequel. To date, the first three novels and the prequel have been released, with the fourth coming September this year. Here’s the synopsis of the first novel on Goodreads:

When magic has gone from the world, and a vicious king rules from his throne of glass, an assassin comes to the castle. She does not come to kill, but to win her freedom. If she can defeat twenty-three killers, thieves, and warriors in a competition to find the greatest assassin in the land, she will become the King’s Champion and be released from prison.

Her name is Celaena Sardothien.

The Crown Prince will provoke her. The Captain of the Guard will protect her.

And a princess from a foreign land will become the one thing Celaena never thought she’d have again: a friend.

But something evil dwells in the castle—and it’s there to kill. When her competitors start dying, horribly, one by one, Celaena’s fight for freedom becomes a fight for survival—and a desperate quest to root out the source of the evil before it destroys her world.

Despite giving all that information, I would be deeply disappointed if you’d never heard of this series until now. Seriously.

I could spend an entire day gushing about Celaena and I wouldn’t even be halfway done. Although it’s probably extremely narcissistic to say my favourite fictional character ever is one I find uncannily similar to myself, don’t we all love characters we can relate to?

I won’t lie and say I’ve always liked Celaena. She’s vain, insane, violent and not exactly the nicest character you will come across. And yet, she loves completely ordinary things like reading, shopping, and chocolate. In a way, reading books that stereotype assassins to be cold, heartless robots did nothing to prepare for the storm that was Celaena.

It took me a while (I guess I wasn’t very bright when reading Throne of Glass) to realise if I’m vain, insane (occasionally), and not-so-nice at times but still love reading, everything girly, and chocolate – a necessity in life – wouldn’t that make Celaena a crazily realistic character? But my favourite thing about Celaena?

I won’t go off tangent and state why unlikeable characters are, in fact, a lot more likeable than typical likeable characters (but maybe I should write a post about this one day). However, I’ve always seen such heroines and heroes who start out full of faults as those who have lots of potential to grow. Have a look at author Claire Legrand’s Tumblr post if you want a more detailed explanation.

Anyway, Celaena definitely goes through a ton of character development. Having just read Heir of Fire, I can personally vouch for that. While she may sound utterly badass and powerful, Maas goes the extra mile and proves that heroines can be both courageous and cowardly. Bravery can be seen through most  of Celaena’s actions but she’s got her demons – and ginormous ones, at that.

She’s not completely virtuous, nor kind, and can be pretty lazy at times. But she’s not afraid to be lost, to be defeated and to get back on her feet after all the daggers life has thrown at her.

And that’s why I love Celaena Sardothien.

Do you have any characters you love? Have you found your fictional kindred spirit?