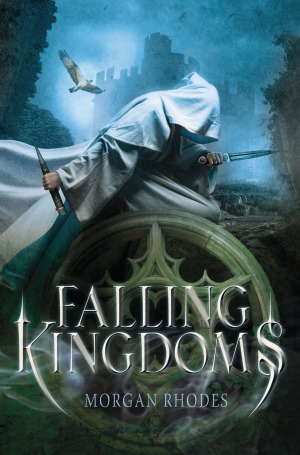 In the three kingdoms of Mytica, magic has long been forgotten. And while hard-won peace has reigned for centuries, a deadly unrest now simmers below the surface.

As the rulers of each kingdom grapple for power, the lives of their subjects are brutally transformed… and four key players, royals and rebels alike, find their fates forever intertwined. Cleo, Jonas, Lucia, and Magnus are caught in a dizzying world of treacherous betrayals, shocking murders, secret alliances, and even unforeseen love.

The only outcome that’s certain is that kingdoms will fall. Who will emerge triumphant when all they know has collapsed?

It’s the eve of war…. Choose your side.

Princess: Raised in pampered luxury, Cleo must now embark on a rough and treacherous journey into enemy territory in search of magic long thought extinct.

Rebel: Jonas, enraged at injustice, lashes out against the forces of oppression that have kept his country cruelly impoverished. To his shock, he finds himself the leader of a people’s revolution centuries in the making.

Sorceress: Lucia, adopted at birth into the royal family, discovers the truth about her past—and the supernatural legacy she is destined to wield.

Heir: Bred for aggression and trained to conquer, firstborn son Magnus begins to realise that the heart can be more lethal than the sword….

If someone had asked me to describe Falling Kingdoms in 4 words while I had still been reading the first 150 pages of it, I wouldn’t have hesitated to say, “YA Game of Thrones”. For the record, I’ve not read or watched Game of Thrones but the atmosphere and general vibe of this novel at the start was exactly how I thought GoT for a younger set of audience would be like—numerous diverse characters, an exciting storyline, and ruthlessly shocking deaths. Yes, it’s a definite compliment.

Unfortunately, that all ended as the book progressed. Which I would touch on later, after listing down the better qualities of Falling Kingdoms.

What I had liked best about this novel was its many characters and their point-of-views that surprisingly, had never come off confusing to me. The distinction between each character’s voice had been clear and precise—a hard feat considering there had been four main POVs! All the characters also had incredibly life-like personalities. Despite being rather unconventional, Rhodes sometimes painted Magnus and Jonas, two of the four MCs, in an almost villain-like light. However, it definitely worked to show just how well she understood her characters; not just their admirable traits but the darker and more disturbing ones too.

Another aspect I loved was the narrative. It made readers feel slightly detached but was far from a bad thing as it had been suitable; the characters were the complex sort whom you probably won’t whole-heartedly empathize with (like real life people!). Basically, reading Falling Kingdoms was similar to being an observer in the lives of actual people and that really helped define the book’s unbiasedness in the war between kingdoms. Yep, the synopsis wasn’t kidding when it mentioned choosing sides.

This next little bit is neither positive nor negative, just a little feeling I had. Before each of the characters that died had died, I sort of knew their forthcoming fate, no matter how unexpected. I was wondering if I was the only one who felt that or had any of you who’ve read  Falling Kingdoms noticed it too?

Anyway, now that I’m done with the good, it’s time for the bad. No, I’m not grinning evilly at all… The first major thing that annoyed me was how fast Theon (Cleo’s guard) started ‘falling in love’ with her. Despite reflecting and realizing they had actually known each other for a few months, those few months had flown by within a mere hundred pages in the book. Might I also mention that there had barely been any development before Theon suddenly (yes, literally suddenly) realized, Oh my, my. I am in love with the princess of Auranos whom I almost always seem to be irritated at! I will admit there had been subtle attraction between them, and I did ship them at first, but following the crazy progression from frisson to ‘love’, that ship may sink for all I care.

To make matters worse, Cleo ended up realizing she ‘loved’ Theon too (capture my eye roll for all eternity) and when she got into certain trouble, she basically waited, like a useless damsel in distress, for Theon to rescue her. Here’s one of the painfully outrageous quotes from that particular incident:

What happened to proactive, strong and independent princesses? Anyway, this next part is pretty spoilery so only highlight the white section below if you’ve read Falling Kingdoms already or don’t mind spoilers!

When Theon had died, it came close to being one of the happiest moments of my life and a maniacally gleeful smile had been pasted on my face. Why? It meant there was still hope for the redemption of the romance aspect in the book! (I not-so-secretly ship Cleo and Jonas)

Apart from the horrid romance, I was also pretty icky about the lack of foreboding atmosphere to hint at impending war. The words tell readers that war is coming but that’s about it. You won’t witness any legit preparations and honestly, life just seemed to go on as per normal for everyone in Auranos, Limeros and Paelsia.

I will admit Falling Kingdoms seemed perfectly fine and good—even enjoyable—on the surface (excluding the Cleo-Theon thing, of course) until you start questioning the fine details and numerous inconsistencies that doesn’t add up in retrospective. For example, Jonas had no military training whatsoever and had merely been a winemaker’s son a few months before. He probably knew how to use a bow and arrows as prior to the uprising, he used to hunt with his brother, but wielding battle axes and double swords? Those are glaringly out of his league. Unfortunately, those were the exact weapons he had used on the battlefield with expert precision. What. The. Hell?

As for the last protagonist, Lucia. I don’t have much to say about her and that, there, is the exact problem. From the very start, we know she’s the prophesied sorceress and she does accomplish some pretty impressive feats (killing people, I do so admire her grit and brutality amid her usually gentle demeanor despite being raised as a pampered royal). All the same, I really wished the author had focused more on how Lucia is adapting to her newfound powers than the romance between Cleo and Theon and her ‘brother’ Magnus’s attraction to her.

Regardless of the abundant negative opinions I had about Falling Kingdoms, I’m quite confident I’ll be continuing with the series as there’s no doubt it’s brimming with a lot of potential. I only hope that the future installments will have less romance (never imagined I would ever say that, being a hopeless romantic and all) and have much more adventure and magic instead! Would I recommend this? That’s a harder question… if you’re one for tons of—or too much—romance, you might enjoy Falling Kingdoms. However, don’t read it and expect an epic fantasy.

One thought on “Review: Falling Kingdoms by Morgan Rhodes”