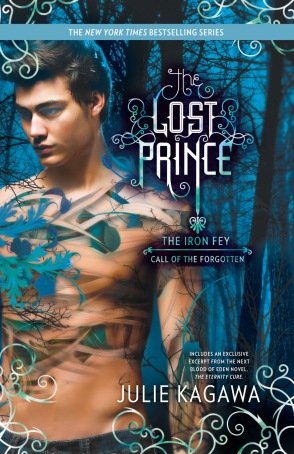 Don’t look at Them.
Never let Them know
you can see Them.

That is Ethan Chase’s unbreakable rule. Until the fey he avoids at all costs—including his reputation—begin to disappear, and Ethan is attacked. Now he must change the rules to protect his family. To save a girl he never thought he’d dare to fall for.

Ethan thought he had protected himself from his older sister’s world—the land of Faery. His previous time in the Iron Realm left him with nothing but fear and disgust for the world Meghan Chase has made her home, a land of myth and talking cats, of magic and seductive enemies. But when destiny comes for Ethan, there is no escape from a danger long, long forgotten.

My name is Ethan Chase.
And I may not live to see my
eighteenth birthday.

Before I start this review expressing how sorely disappointed I am, let me state I absolutely adore the The Iron Fey series (or more exactly, books 2-4). Before starting on The Lost Prince, I was a tad apprehensive as I worried I would feel the same way about it as I did The Iron King, the debut of The Iron Fey – boring. Unfortunately, I might not have found The Lost Prince too dull but it downright grated on my nerves.

The story revolved around Ethan Chase, Meghan’s younger brother, whose disappearance back in The Iron King was what led her into the world of the Fae. Set approximately 14 years after the events of The Iron Fey, Ethan is now a young adult and his ability to see faeries have, to put it mildly, made him seem like a strange and troubled teenager. He was dragged even deeper into the terrible – from Ethan’s point of view – world of faeries when local Fae and half-breeds start mysteriously disappearing while a new sort of faery that looked wispy and translucent appeared.

What is this new type of faeries? Here’s a hint: remember in The Iron Knight, when Ash and his gang came across a bunch of glamor-sucking ghost-like faeries? Bingo.

At the beginning of the book, it was slightly difficult for me to picture Ethan all grown up instead of as Meghan’s four-year-old kid brother. Of course, his character had changed completely and despite that was something that comes with getting older, I wasn’t a fan of the humongous transformation. Throughout the story, it was incredibly hard for me to link the younger Ethan and the current Ethan together because there was barely any common traits between them!

Moreover, the current Ethan is basically your typical bad boy – good-looking though menacing, volatile, impulsive, glares a lot and has some complicated reason for keeping everyone at arm’s length while hiding his secret sensitive side. Yawn. I understand why he doesn’t let anyone apart from family get close to him but his mean attitude towards the whole world was overdone, in my opinion.

That, however, was not the most despicable thing about Ethan. What really got on my nerves was his inability to let Kenzie  (his female counterpart) make her own decisions. He would constantly go on rants where everything was ‘potentially lethal’ to Kenzie and he just ‘wanted to protect her’, while outrightly dismissing her wishes. If I was Kenzie, I would’ve feared dying of annoyance at Ethan more than any bloodthirsty faery. I applaud her unfailing patience, I honestly do.

In spite of being thoroughly put off by Ethan, I still found the world of the Fae as enticing as ever. Kagawa has obviously put a lot of effort in the deadly and magical world she had created and it felt amazing coming back to it after having finished The Iron Knight roughly 2 years ago. I also loved a (sort of) new character who was Meghan & Ash’s son, Kierran. I know there was a sort of prophecy about him in one of The Iron Fey novellas, The Iron Prophesy, but it would not be mentioned in The Lost Prince so if you’re interested, you would have to search it up.

Anyway, Kierran was an intriguing character and although in one particular scene, he did share Ethan’s annoying tendency to overlook his female counterpart’s wishes in the name of protection and safety, he was still a fascinating character overall. Kind, calm and a lot wiser than Ethan, I really did wish the protagonist of this spin-off series had been Kierran instead. The story actually does have a lot to do with him and as of now, I am still wondering what exactly Ethan’s role in the story is when Kierran obviously plays a bigger part.

Other aspects of the story such as the pacing and plot were pretty alright though nothing to get excited about. The pace of the story was actually really slow at the start but after the halfway point when Ethan finally journeys into the Nevernever (not a spoiler because that was obviously inevitable), things picked up and the tale will unravel at a much more engrossing speed. There was one teensy part in the story, though, that I really couldn’t stand. I can’t reveal what it specifically was due to spoilers but I will share my feelings about that particular part.

It mainly concerns a secret Kenzie was keeping from Ethan and although I did suspect what that secret was due to how her friends treated her, it was still a little shocking when it was revealed. Not because I didn’t see it coming, but because I was appalled at the direction in which Kagawa took Ethan and Kenzie’s relationship due to said revealed secret. I was not a fan of Ethan-Kenzie to begin with but after that, their relationship took a major turn for all things cliché and over dramatic.

All in all, I found The Lost Prince a tremendous disappointment, especially after having loved the past 3 novels of The Iron Fey so dearly. I do think I might be the black sheep in feeling that way. Nonetheless, I will be traipsing forward with The Iron Traitor, the second novel in The Iron Fey: Call of the Forgotten, in hopes that similar to the original series, I would love the later few books a great deal better than the first.

didn’t read Norwegian Wood, but I did read after the quake and my fav short story was honey pie 🐻🍯
🌳🏠🌱
our hot girl summer is just hiding in air conditioned places and avoiding the sun (which is a deadly laser) 😮‍💨
From the time capsule that is @__jacey_’s disposable cam!!
Loading Comments...
%d bloggers like this: