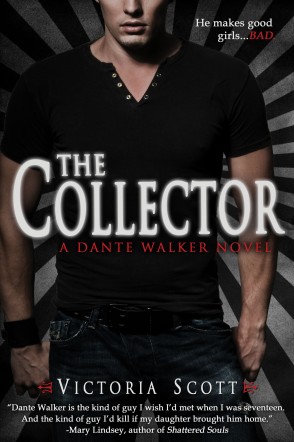 Dante Walker is flippin’ awesome, and he knows it. His good looks, killer charm, and stellar confidence have made him one of hell’s best—a soul collector. His job is simple: weed through humanity and label those round rears with a big red good or bad stamp. Old Saint Nick gets the good guys, and he gets the fun ones. Bag-and-tag.

Sealing souls is nothing personal. Dante’s an equal-opportunity collector and doesn’t want it any other way. But he’ll have to adjust, because Boss Man has given him a new assignment:

Dante doesn’t know why Boss Man wants Charlie, nor does he care. This assignment means only one thing to him, and that’s a permanent ticket out of hell. But after Dante meets the quirky Nerd Alert chick he’s come to collect, he realizes this assignment will test his abilities as a collector…and uncover emotions deeply buried.

Dante Walker. He is one annoyingly hot, funny and arrogant guy. I honestly can’t decide whether I would like to knee him in the groin or kiss him. However, what I can decide is that he was the perfect protagonist for Victoria Scott’s amazingly original take on the whole heaven-hell-angels-demons genre. Dante basically helps Satan (or Boss Man, as referred to by Dante) collect the souls of humans who are major sinners and he doesn’t mind – not a single bit – as it does have many benefits.

Although Dante does seem like your run-of-the-mill bigheaded bad boy, he’s undoubtedly good at being one. He’s got plenty of attitude and definitely seems completely carefree and self-absorbed. However, the little glimpses given into Dante’s life before he died and started working for Boss Man revealed a surprisingly human and hidden side of him.

Despite the fact that Dante never felt remorse for taking others’ souls and dooming them to an afterlife in hell, his newest assignment, Charlie Cooper, became a catalyst for his change of views. The main reason being that Charlie is an all-rounded good girl and Dante usually collect souls that aren’t so angelic. Saying she was a breath of fresh air to him would be a crazy understatement.

I did love the vast difference between Charlie’s and Dante’s characters and that Charlie could see right through Dante’s big personality. However, I felt her innocence was a tad overdone and at times it felt slightly unnatural, making it a little uncomfortable to read and process.

The uniqueness of Victoria Scott’s adaptation of the whole heaven and hell/angels and demon theory made The Collector an utterly unpredictable read. It was so much fun discovering how things worked in Dante’s reality and I would say this book was a favorite of mine in the YA paranormal genre. In fact, the pacing was also impeccable and I actually finished The Collector in 3 days, which was lightning speed for me as I read like a snail.

To sum this up, The Collector was hilarious, well-paced, original and had such touching yet fun romance. I’m looking forward to reading the sequel, The Liberator, (hopefully) soon. But I do wish that Charlie will be a more realistic and believable character in the sequel while Dante… he can just keep being his obnoxiously attractive self. If you’re looking for a quick, not-too-intense read, I would definitely recommend this!

One thought on “Review: The Collector by Victoria Scott”