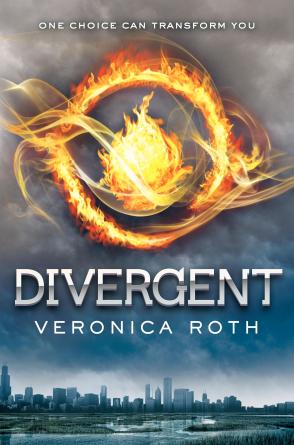 In Beatrice Prior’s dystopian Chicago, society is divided into five factions, each dedicated to the cultivation of a particular virtue—Candor (the honest), Abnegation (the selfless), Dauntless (the brave), Amity (the peaceful), and Erudite (the intelligent). On an appointed day of every year, all sixteen-year-olds must select the faction to which they will devote the rest of their lives. For Beatrice, the decision is between staying with her family and being who she really is—she can’t have both. So she makes a choice that surprises everyone, including herself.

During the highly competitive initiation that follows, Beatrice renames herself Tris and struggles to determine who her friends really are—and where, exactly, a romance with a sometimes fascinating, sometimes infuriating boy fits into the life she’s chosen. But Tris also has a secret, one she’s kept hidden from everyone because she’s been warned it can mean death. And as she discovers a growing conflict that threatens to unravel her seemingly perfect society, she also learns that her secret might help her save those she loves . . . or it might destroy her.

I first read Divergent about a year and a half ago, before I started this blog but now that Allegiant (the final installment) is going to be released soon (22 Oct 2013), there’s the Divergent movie next year (21 Mar 2014, starring Shailene Woodley & Theo James) & I actually have a platform to share my love for this fan-freaking-tastic trilogy, I decided to re-read & review it. So how did I find Divergent after reading it twice? STILL JUST AS AMAZING.

Honestly, this review might include more of my fangirling than any analysis of the book. Veronica Roth is such an amazing author because the world building, characters, action, storyline, pace and everything else I could think up of to judge books were simply perfect. You would expect an almost 500-page long book to get dry at some parts but no, Veronica Roth just wouldn’t allow you to take any breaks from the feels Divergent induces.

Although all I want to do is roll all over my bedroom floor fangirling, I shall at least share some of my thoughts on the very lovely characters I was introduced to in Divergent. First, there’s Tris (obviously). I loved her journey throughout the book to find herself. Having been raised in Abnegation (the selfless) to forget herself, she really didn’t know what defined her at the beginning. It was thrilling to see her learn that there’s so much more to her and everyone else around her than she previously thought. The fact that in Divergent, people were split into only 5 factions based on what they believed prevents war & conflict really made more obvious how humans really cannot be categorized so cleanly.

As for Tris’s love interest, – whom I shall not name because it was so fun when I just dived into Divergent (no pun intended) last year without knowing who the male protagonist was – he’s swoon-worthy. Not only that, he’s an awesome individual with so much character, he was literally brought to life. Tris and him were the sort of couple that would probably still work out in a non-fictional world. They didn’t need each other to complete themselves, they were 2 individuals who complemented each other. He was such a breath of fresh air from other YA male protagonists! For instance, check out this little extract:

“Don’t pretend”, I say breathily. “You know I’m not. I’m not ugly, but I am certainly not pretty.”

“Fine. You’re not pretty. So?” He kisses my cheek. “I like how you look. You’re deadly smart. You’re brave.”

There was no cliché reassurance that she was pretty yet he still sounded so sweet.

I guess my love for Divergent is quite obvious now. I mean, it’s unspeakably hard to resist such an emotional, action-packed & engrossingly messed up story. Would I recommend this read? HELL YES. You literally need to drop whatever it is you’re doing and get a copy of this. In the meantime, I shall go re-watch the movie trailer obsessively and count down the days to Allegiant!

P.S Here’s the movie trailer! I loved the knife throwing scene at the end, THE TEARS IN HER EYES.