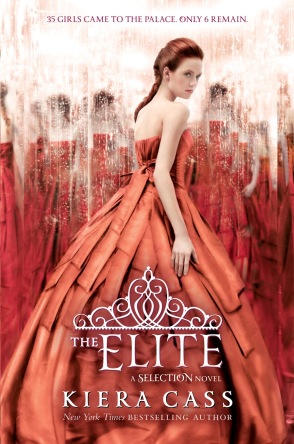 WARNING: CONTAINS SPOILERS FOR THE SELECTION.

Thirty-five girls came to the palace to compete in the Selection. All but six have been sent home. And only one will get to marry Prince Maxon and be crowned princess of Illéa.

America still isn’t sure where her heart lies. When she’s with Maxon, she’s swept up in their new and breathless romance, and can’t dream of being with anyone else. But whenever she sees Aspen standing guard around the palace, and is overcome with memories of the life they planned to share. With the group narrowed down to the Elite, the other girls are even more determined to win Maxon over—and time is running out for America to decide.

Just when America is sure she’s made her choice, a devastating loss makes her question everything again. And while she’s struggling to imagine her future, the violent rebels that are determined to overthrow the monarchy are growing stronger and their plans could destroy her chance at any kind of happy ending.

I definitely have a love/hate relationship with The Elite. Its predecessor, The Selection, actually made it onto my favourites list but unfortunately, I can’t say the same for this book. For a majority of the book, I was extremely annoyed with America.

Back in The Selection, America Singer had been a great protagonist. She was selfless, compassionate and smart, although endearingly stubborn at the same time. However, she suffered a 180-degrees change in The Elite. Somehow, America turned into a selfish brat. Everything was about her. Her difficulty in choosing either Maxon or Aspen. Her feeling inferior to the other Elites. Her needing time. Her not being sure. Her, her, HER.

Really, it was such a disappointment seeing one of the nicest protagonists I’ve come across turn into a car wreck.

However, she pulled her crap together in the end and realized how self-absorbed she had been. This was what made me ponder over my rating for this book. Since America learned from her mistakes, does that mean Kiera Cass meant for her to be a pain at the beginning?

As for the love angle, I’m still on Team Maxon. Sure, my support for him wavered a little due to a particular event in the book, but in the end, the verdict’s still the same. I tried being more open-minded to Aspen but I really can’t see him as anything but too stubborn and self-centered for America.

Moreover, Maxon did not put up with America’s crap in the first 3 quarters of The Elite. Dude’s definitely got a backbone. I like!

The plot in The Elite was also much less fairytale-esque as compared to The Selection. The rebel attacks were getting increasingly serious and America would discover a huge national secret. Although the secret felt slightly predictable to me. Nonetheless, The Elite has a lot more action (with the exception of the slow start) and the glitzy front in the first installment was peeled back to reveal some very dark and unpleasant discoveries.

The claws are out among the Elite. And I really do hope America realizes she’s not the only girl in the world.

Although I literally suffered through 3 quarters of the book, the last quarter was undoubtedly worth the suffering. Crazy, heart-wrenching revelations and a humongous improvement in America, it really was an ending to die for. The conclusion itself made me want to give this a 5-star rating but I guess I had to be fair and take into consideration the awful first three quarters.

To sum this up, The Elite sure is hard to rate with its sky high highs and rock bottom lows. But like I said, the initial annoyance is worth the mind-blowing conclusion. Gosh, I need The One now. Bad. How am I even going to wait until 2014?

3 thoughts on “Review: The Elite by Kiera Cass”