When fifteen-year-old Clary Fray heads out to the Pandemonium Club in New York City, she hardly expects to witness a murder — much less a murder committed by three teenagers covered with strange tattoos and brandishing bizarre weapons. Then the body disappears into thin air. It’s hard to call the police when the murderers are invisible to everyone else and when there is nothing — not even a smear of blood — to show that a boy has died. Or was he a boy?

This is Clary’s first meeting with the Shadowhunters, warriors dedicated to ridding the earth of demons. It’s also her first encounter with Jace, a Shadowhunter who looks a little like an angel and acts a lot like a jerk. Within twenty-four hours Clary is pulled into Jace’s world with a vengeance, when her mother disappears and Clary herself is attacked by a demon. But why would demons be interested in ordinary mundanes like Clary and her mother? And how did Clary suddenly get the Sight? The Shadowhunters would like to know. . . .

Exotic and gritty, exhilarating and utterly gripping, Cassandra Clare’s ferociously entertaining fantasy takes readers on a wild ride that they will never want to end.

To be honest, my first impression of the book wasn’t that fantastic. I had expected it to be yet another story set in a dystopian society, along with authoritarian governments and forbidden romance (I never did read the synopsis of the book). However, after listening to Adel rave endlessly about it (she couldn’t stop after she saw a two-story tall movie poster of the book. Yup, City of Bones is going to be turned into a movie, in case you don’t already know that!), along with her getting extremely excited over the runes and Jace, I finally got down to reading it. I was rather surprised (in a good way) to find that this book isn’t another dystopian society novel, but more of a paranormal and ‘another-world-that-exists-within-our-own’ story. And so here I am, writing my review of the City of Bones!

First, the writing style. I found the writing from a third person’s point of view suitable for the book, which had many characters involved. Most of the books I’ve read is from the protagonist’s point of view, hence I found the third person’s point of a view a refreshing change. Also, the plot was arranged in a way that did not make a lot of things happen at once, which can make the reader feel overwhelmed. These factored into helping the reader have a better understanding of the book, and of course, a less confusing book makes a happy reader!

Next, the language use. My goodness, I had to refer to the dictionary countless times! However, this usage of more complex words isn’t for the sake of just throwing in some random words to make the story more fancy, but they are accurate in meaning and appropriate, contributing to the extremely descriptive writing style Cassandra Clare adopted. Although the scenes were intricate and well written (which allowed me to be able to see the story unfold like a movie in my mind’s eye), the story moved along pretty slowly. But thanks to the humor that was injected into it, it made up for the slow bits and lightened the intensity, making it a fun read for me.

Then comes the characters:

Clary: She was really life-like to me due to her flaws, such as being rash at times. I thought that she was rather mature at some parts for her age (15+/16 years), as I had observed from her decision-making. There were also parts in which I found her naïve, so I guess that balanced our her character.

Simon: I found him rather annoying initially, but that opinion slowly changed as he turned out to be really adorable in a dorky sort of way – adorkable! (I picked up this word from Monstrous Beauty by Elizabeth Fama). He also made some decisions in the book which made me like him better, as it portrayed him as a careful and wise person.

Jace: Jace… is very sarcastic and straightforward. Almost every sentence that comes out of his mouth is dripping with sarcasm. Either that, or he’ll just speak the truth right in your face. As I quote from what Isabelle had said in the book: ‘“He’s not a liar at all. Not about important things. He’ll tell you horrible truths, but he won’t lie.” She paused before she added quietly. “That’s why it’s generally better not to ask him anything unless you know you can stand to hear the answer.” ‘ However, I was rather confused and even irritated by the sudden change in Jace’s character close to the end of the book – which I’m not going to give spoilers about – I just don’t understand why. The change was too drastic for me, but I suppose I didn’t take notice of the things that could have caused it.

Isabelle: She is by far my favourite character in the book. I would say that she’s feisty, and although she was rather mean initially, I didn’t find it repulsive as I thought that it was natural for her to act towards Clary in that way. However, she did become more friendly towards Clary through the course of the book. What I found attractive about Isabelle was that she was really protective of Alec, her brother. It showed that she actually has responsibility and shares much sibling love with him. And not to mention, her great fashion sense and make-up skills!

Oh yes! One thing you might want to take note of:

There was a part of the book left me screaming with rage. In fact, it left all of my friends who had read the City of Bones shocked. Here’s a screenshot by Adel on my rant: 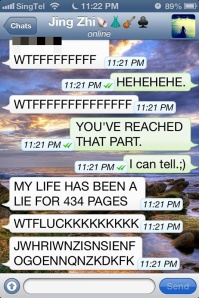 Brace yourself for it!

Now, on to the movie adaptation of the City of Bones!

One thing I simply must mention is that Godfrey Gao (who will be playing Magnus Bane) is highly attractive to me. And I thought that Jemima West was a good choice for playing Isabelle Lightwood! In fact, I think that the entire cast (at least the main characters) for the City of Bones has really good looks, and they were close to my mental imagery of the characters. I cannot wait for the release of the movie (23 August 2013)!

So, that’s about it for my review on the City of Bones. Happy reading!